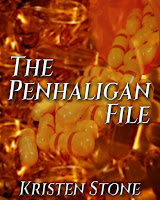 The Penhaligan File was my second published book.

Steven MARK ANDREW Penhaligan uses his middle names when pursuing his career as an investigative journalist and novelist to. Little did he suspect his casually innocent use of a pen name would put his life in deadly danger.

When asked by the vulnerable, recently widowed, Paula McCarthy to investigate the true facts behind the new “Wonder Drug” which she is convinced was the real cause of her husband’s sudden, premature death, Mark finds himself plunged into a deadly game of sex, deceit, intrigue, corporate double-dealing - and the all-pervading threat of sudden, casual violence and brutal murder.

For Steven Mark Andrew Penhaligan, the revelation that the drug he’s investigating is in reality a product of his own father’s company - The Penhaligan Foundation, only deepens the nightmare of the situation he finds himself enmeshed in. For while strangers can be dangerous – for Penhaligan, family can potentially be deadly.

Wry, laconic, thrilling and suspenseful – “The Penhaligan File” takes both the reader – and it’s unsuspecting hero, on a decent beneath the veneer of corporate luxury and into the morally dubious underside of business where profit pre-empts the value of human life; and the truth is whatever wealth can buy.