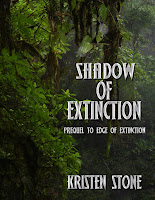 Now that I have given up trying to do everything for everyone, well, all the writers who were published through Blue Hour, at least, I have finally been able to concentrate on my own writing. I miss working with other people but it was too much and, sadly, the stress was making me ill. Publishing is a lot harder than I thought. The getting the books ready is the easy part, getting people to buy them is the hard part and I have to confess I haven't got the marketing skills required, nor the time to pursue this on the behalf of half a dozen other people. Not to the extent I would like that would do them justice.

So given the freedom to sit down and write for myself I have been busy clearing my head of all the stories that have not had time to emerge. The first is the prequel to my very first published novel, Edge of Extinction. Edge underwent various formats before it finally made it to publication. One had what has become Shadow of Extinction. I have always wanted to tell Kianda's story from birth to death and Shadow deals with the first part. Not so sure I want to see him killed off, or how I would write that, but that is for the future if this is a success.

So Shadow of Extinction is the beginning. A baby born and a child growing up in a remote part of the Amazon in the halcyon days before the trauma that arrives in Edge.

Available as an ebook or paperback Here
Posted by Kristen at 13:29 No comments: